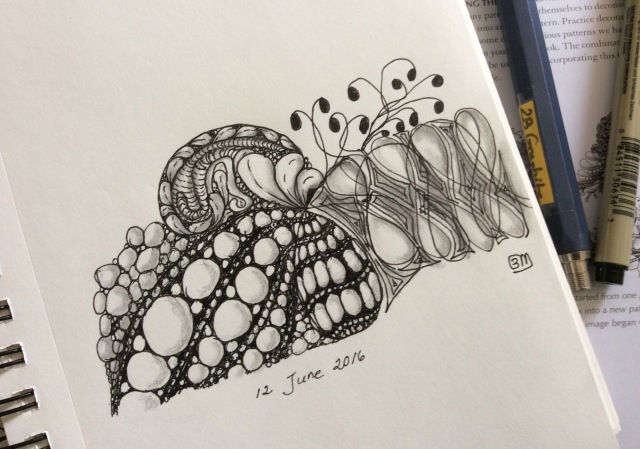 Instead of moving on to the next “day” in One Zentangle a Day, I decided to try another experiment with transitioning from one pattern to another with similar characteristics. Deciding to do this exercise in my sketchbook instead of on a tile, and forgetting about lightly penciling in a string (drawing area for, or barrier between, patterns), I produced the whole thing–including strings–in ink. When I realized there would be lines “showing” where a smooth transition would have existed between patterns, I got flustered enough to start one pattern off completely wrong. It is merely scribbles, over which the desired pattern was redrawn. You can see the most blatant error on the lower right (in the pattern called Echoism). Finishing the ink corrections, I got started with the shading, hoping that it would essentially hide other, smaller, and less obvious errors.

Before I go on, part of the Zentangle philosophy is that there are no mistakes. Well, that’s great for strictly meditative work or to encourage beginning artists. But while I, too, am a beginning artist, I know just enough artists who would spew their mouthful of coffee at the idea of no such thing as mistakes, and I happen to agree with the latter group. I guess maybe I am usually more comfortable with mistakes than some other Zentanglers (Zentanglists?), but less comfortable with the “no mistakes” philosophy than I should be if I am using this art form as a meditation device.

So back to my self-critique…

While shading, I thought about the author’s recommendations for using shadow with particular patterns. Looking at some examples both in the book and online, I noted that some artists stick to traditional shading–mostly a single light source–while others seem to shade each pattern as though it had been drawn from a different edge of the Zentangle tile. That is, instead of shading the whole tile as though employing a single light source for the whole tile, it looked as though shading had been dependent on wherever the “bottom” edge was when a pattern was drawn. I also noted that neither the author nor the other artists necessarily used the shading effects recommended in the book as each pattern was first presented.

Last night I had the honor of attending a party hosted by a local celebrity, artist Roland Richardson. I am not sure how old he is, as he looks timeless, but he is a successful professional artist on our island of St. Martin. I live on the Dutch side of the border while the Richardsons live on the French side. Their home is less than 5 minutes’ drive at a leisurely Caribbean pace. On one of the artist’s walls was a huge, floor-to-ceiling painting of a large hill. He painted the canvas in such a way that the lighting was different depending on the time and the day on which he painted it. Viewing the painting from different angles gives a different sense of time and cloud shadows. That was his purpose–to paint each part of the painting in its moment, as he was painting it. He told me he deliberately painted from exactly the same spot across several days and beginning at different parts of the day; so that what he painted changed as the sun moved across the sky during any given session. It was amazing to see so many aspects of “now” in the single painting without noting any evidence that there was any disconnect or broken pattern in the art work.

Maybe that change of viewpoint is something encouraged to some degree by the creators of the Zentangle form–that, as you turn the tile to simplify the drawing of a pattern or because you want to change the focus, you use that vantage point for the shading: not one single source of light for the entire tile, but the same light source for the particular pattern. Perhaps that is why any Zentangle “how-to” book encourages turning the tile as the work progresses–to see the effect from a different vantage point. No matter what the purpose or philosophical outlook, few “recommended shading” techniques are generally seen. Even shading is treated unequally both on a single tile and across Zentangle artists.

Clearly, both the idea of errors and the use of shading patterns per given motif are personal choices. Does that make any pattern less “equal” among other tiles using the same tangle? Not likely. In fact, it makes each tiny tile a unique miniature masterpiece in its own right. It also fits in with the Zentangle philosophy stating that there are no mistakes in this meditative form of art. Yet, even the idea of mistakes is unequal.