The bigger the issue, the smaller you write.

Here is an interesting observation on the way a great book tells a story. The way a book is written can tell us more about people than detailed description can. Author Libby Sommer points this out by sharing a review of a classic.
Thank you, Libby! 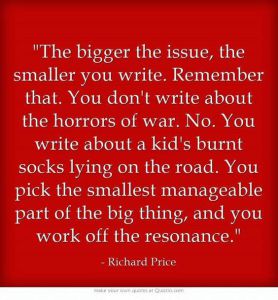 A fantastic example of this writing advice is Kurt Vonnegut’s  Slaughterhouse-Five.

Poignant and hilarious, threaded with compassion and, behind everything, the cataract of a thundering moral statement. – The Boston Globe

Kurt Vonnegut’s absurdist classic Slaughterhouse-Five introduces us to Billy Pilgrim, a man who becomes unstuck in time after he is abducted by aliens from the planet Tralfamadore. In a plot-scrambling display of virtuosity, we follow Pilgrim simultaneously through all phases of his life, concentrating on his (and Vonnegut’s) shattering experience as an American prisoner of war who witnesses the firebombing of Dresden.

Don’t let the ease of reading fool you – Vonnegut’s isn’t a conventional, or simple, novel. He writes, “There are almost no characters in this story, and almost no dramatic confrontations, because most of the people in it are so sick, and so much the listless playthings of enormous forces. One of the main effects of…