The topic of today’s lesson in One Zentangle a Day was “repetition creating transformation,” which ultimately results in more optical illusion. It’s The book’s Day 21, the last day of Chapter 3: Geometric and Organic Patterns. Today’s patterns are Rick’s Paradox and B’tweed. Although I don’t quite have the hang of B’tweed, I attacked Rick’s Paradox–with a ruler. I love optical illusions, and Rick’s Paradox gives plenty of leeway for creating them. B’tweed also lends itself well to creating illusion, but not as well as Rick’s Paradox. 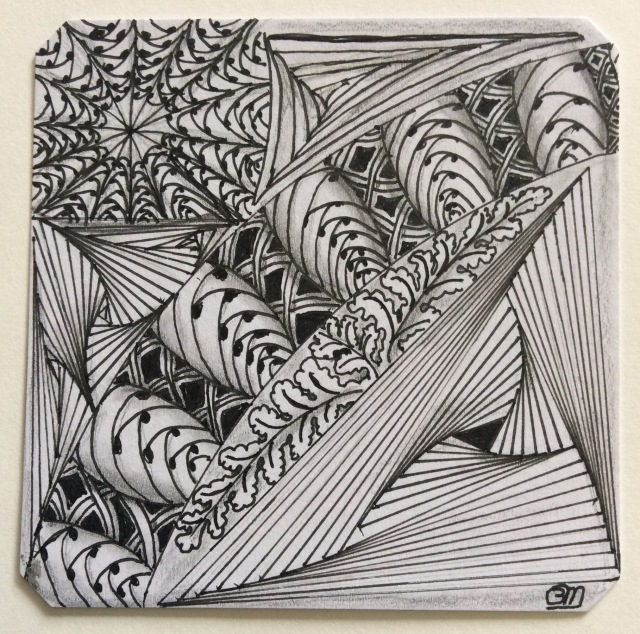 Illusions is primarily Rick’s Paradox and B’tweed, with a nod tomSampson and Vega.

The repetitions of Rick’s Paradox in various positions allows for all sorts of illusionary effects, from wave patterns to fans to just plain nested triangles. The freehand “original” pattern is at the top, while the bottom right and center left are multiples of the pattern drawn in different directions. Except for the freehand form, all of the other iterations of the pattern were drawn with a ruler. Why? Because the pattern consists of only straight lines. The curvilinear effect is an optical illusion.

Similar effects occur when B’tweed is drawn much less curvy than I’ve done here. As I said, I don’t quite have a handle on B’tweed yet, but I am working on it. Aside from the need for a more linear effect, I also need to make the “dots” into eclipses so that they more clearly define an intersection with the lines they touch. I didn’t figure that out until I finished working with this pattern in this tile. A novice mistake.

Optical illusions have always fascinated me, and were the subject of a science term paper in the seventh grade. Mirages are just as much optical illusions, but some of those (like the oasis in the dessert) are helped along by environmental variables. The types of optical illusions created here are purely interpretive–our eyes want to add curves where only straight lines exist. Actually, it’s the brain that does that; the eyes merely transport raw data.

While drawing this tangle, I started thinking about illusions that we perceive in the world around us. Not optical illusions, but social ones. Each of us creates illusions that address who we are and what our role is in society. I wonder how much of what we broadcast to the world is who we actually are, or if we send out illusions of who or what we want to be. Personally, even at age 67, I still don’t know who or what I am. I am not certain I send out the right signals to others. Part of that might be from having been a nerd most of my life. Part may have much to do with the chaos in which I grew up.

My mother was very into “What will people think/say?” Somewhere along the line, my young mind translated that as, Who I am doesn’t matter anywhere near as much as what people think of me. Being me, I rebelled against this fallicy, and stopped caring so much about what others thought of me as long as I was OK with myself. Then I realized that, for any social entity to work well, it is important to consider others. For quite some time, I spent far too much time making others happy. So next, I swung the other way and managed to alienate people about whom I cared a great deal and really didn’t mean to annoy. The problem is that once you alienate someone, it is very difficult to win them back. When I was studying education, one of the most important concepts was that it takes a great deal more effort to re-teach something that was learned incorrectly than to teach it right the first time. Clearly, in teaching others about me, I had made some serious errors. All I can do now is be patient and try my hardest to let the real me–and my true intentions–show through. Correcting social errors takes much time and patience, neither of which I have in abundance. But I will try.

That’s me. But what about others? I try very hard not to be judgmental, and almost always succeed in this. Experience with individuals over time is what I use to paint a mental portrait of them. Thus, the image is constantly changing. But how do others respond to me and their acquaintances and friends? Do they also take time and refrain from hasty judgments? Some people do, but others seem to make immediate assessments. Does one’s perception of time and its importance cause this? Is it perception of self that matters? Are there combinations of self perception and importance, along with experiences, make us who we are? And how much control do we actually have over the illusions about ourselves that we project? And then there’s the question of how honest our self projections are. So many questions, so many illusions.

Well, I want to play around with more ways of creating visual illusions using these patterns and a few others that lend themselves to manipulation–like Cubine and Beeline. And some of the weave-like patterns…